Looking in the kitchen of any restaurant may cause you to never eat there again. Looking behind the curtain at a church may cause you to question your faith. I’ve seen it happen. Why is it? I think it’s because we have unrealistic expectations for what goes on at church.

There are false expectations many people build into their faith. They build their faith upon the idea that mystically everything in the church is okay. Perhaps they want it to be because their world is not okay. I know that I've talked with several men who while going through midlife crises considered a career transition to the church. I'm sure at times this can be healthy but for these men it was not. I know that because they said, "I'm tired of working in the world...it's hard. I want to work in the church where everyone is nice and things are easier." If that's you, we need to talk. Let me tell you about my job, behind the curtain.

Now first off, I love my job. I consider myself happy with about 80% of what I do, which I think is a phenomenally high percent! I will also gladly conceded that my job is probably "easier" than other jobs. It is less demanding than being a roofer in the summer. It is less stressful than being a CPA in April. It is more flexible than being an air traffic controller. I probably have a better work environment than your regular prison guard. I like my job and it's a good fit for me, but it's not without problems.

The church is a workplace and isn't immune from common workplace problems. For example, one thing shocking to non-church employees is churches sometimes fire people. You might not expect that or only for really bad, news-worthy, offenses. Those spectacular flameouts happen, but sometimes a person is let go because they aren’t doing their job. Some might say, “The church should be patient and forgiving.” Most are, but how long do you keep paying someone when they can't or won't do the job they were hired to do? It would be a waste of people’s generous gifts to squander them on a person who isn’t working. It’s a shocking expectation difference for those who think everything magically works out in the admin offices at a local church.

Here are the top four false beliefs many people have about working at the church. They falsely believe that...

The truth is that Christians don't always act like Christians. We know that and need to understand imperfect people will act imperfectly in and out of the church. One imperfection is being overly critical of leaders. We have a rebellious spirit in our hearts (please tell me I'm not the only one!) and that often leads us to be critical instead of understanding.

God does lead and guard the church. He has said that His church will prevail. He is accomplishing this victory through the power of his Spirit at work in the lives of ordinary people like you and me. This means that God is (or should be) in our planning and strategic moves. It does not mean that we don't have to make business decisions and think intentionally about the church's future.

Moral problems are problems most often because they are in gray areas. How do you negotiate peace in a church when a couple gets a divorce and both want to stay? What is the right way to handle that? (I ask because I know several wrong ways.) This and many other scenarios are not clear cut right vs. wrong types of decisions. Sometimes you have to make what you think is the least wrong choice. It's reality. It's hard. It's messy. It's life in the church.

This is what's behind the curtain and it takes a strong stomach to wade through it all. We're not the first to deal with it. The church in Acts dealt with racism (Acts 6), lies (Acts 5), disagreement among leaders (Acts 15), and other problems! The church isn't perfect. It is being made perfect, but that won't be completed until we enter our heavenly home. So, in the meantime, we faithfully do the best we can with what we've got. It's probably time we just opened the curtain because there's no use in denying it. People in the church are just people. 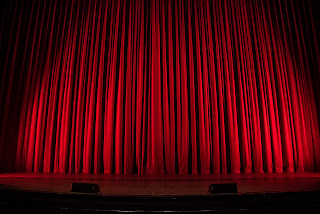