Stereotypes Are So Cliche

September 26, 2018
This word stereotype is an interesting word. It comes to us from the Greek through the French and it was used to describe solid type. It literally means “solid type” and refers to the printing system of movable letters that were slid around to make the same print time after time. Eventually it became used of people as they looked at groups of people different from them. They looked on these ethnic groups, socio economic groups, or regional groups and decided, “They’re all the same. These people are all duplicates." It’s also where we get the word “cliche.” “Cliche” is an onomatopoeia from the sound of a printing press running, “cliche-cliche-cliche,” running off the same copy. 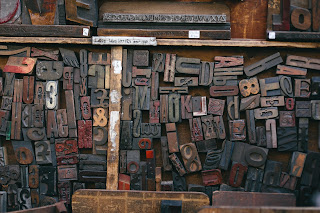 The problem grows because as we talk about people, we find others who are sympathetic to our viewpoint. They might have had the same bad experience at a store or perhaps share the same prejudice about an ethnic group. This agreement builds a caricature of the real person. This caricature is much worse than reality. The reality, in fact, no way agrees with our caricature. Yet, the printing press of our stereotype keeps running, "cliche-cliche-cliche."

Last Sunday I shared the amazing story of Darryl Davis (listen to him tell his amazing story here) who was compelled to break through the stereotype of race. He was tired of people running off cliched copies about black people, copies that had no connection to reality. Seeing this demonized copy of African Americans caused Davis to ask, "How can you hate me without even knowing me?"

This question is one we should all ask. How can people hate us when they don't know us? More importantly, how can we hate people when we don't even know them? This question should move us, like Davis, beyond talking about people to start talking to people. We must talk to the people (or the person) we struggle with or even hate. It is the only way we can move past our cliched caricatures and into true relationship with each other.

Perhaps this is why we read time and time again in scripture to talk with the people we don't like. It seems that God wanted to give us a little encouragement to stop talking about people and start talking to them. He did this because he knew that we would have to talk to them in order to move past our caricatures and into true relationships. If that's the case, what's holding us back? Would we rather talk about people than to them? Why don't we want a restored relationship with everyone we know?